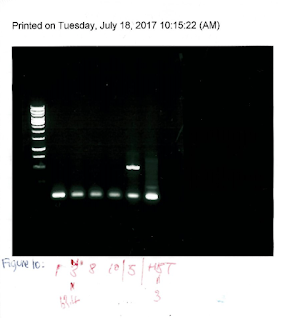 
As it can be seen from figure 10, the PCR didn't really work for most of the DNA samples, since only the primers are giving out a signal for DNA samples N1, N3, N8, N10. However, for DNA sample N5, there are two visible strands, suggesting that PCR has fully worked, showing the prier strand and the DNA part of interest strand.

To check whether the DNA samples were ok, a new PCR was prepared. This time, using FS1-RS2 and NSEQ1-RS1 primer mixes. Results are shown below in figure 11. 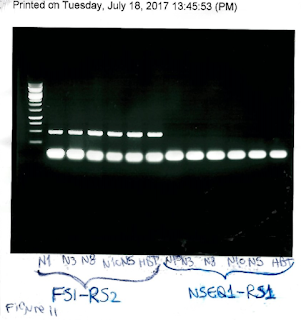 
As it can be seen from figure 11, the DNA samples are ok because, at least for FS1-RS2 primers, all DNA samples gave signal at the point of interest, suggesting the primers were the problem on the previous PCR reaction. Furthermore, it can be seen that the solutions treated with NSEQ1-RS1 primer mix didn't give signal for the DNA area of interest.

To check whether it was the primer not working, a new primer mix with NSEQ1-RS1 primers was prepared to do a new PCR. 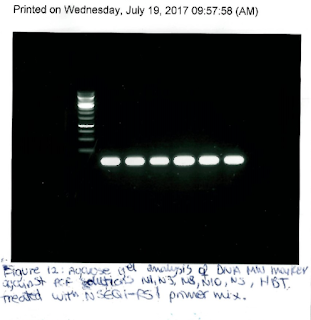 It can be seen from figure 12 that the PCR didn't work, as only the primers themselves are emitting signal, thus, suggesting that the NSEQ1-RS1 primers combination is not binding properly to the DNA's part of interest. 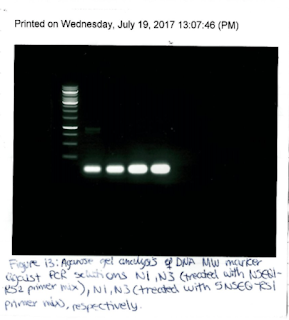 In other to obtain more data, other colonies of the HBT  tag colonies were treated with 5NSEQ-HBT0PCR-REV primer mix. Results are shown in figure 14.

INFO: The primer mix should only bind if the HBT tag is present in the DNA. 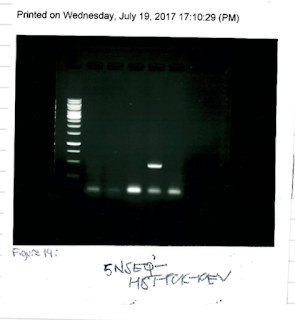 It can be seen from figure 14 that out of 5 HBT tag colonies, only one seems to actually have the HBT tag. The colony with a HBT tag seems to be colony #5-2. 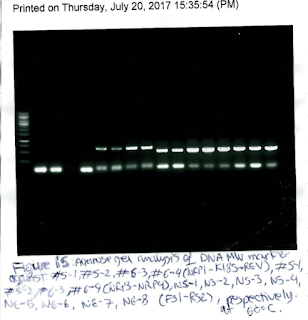 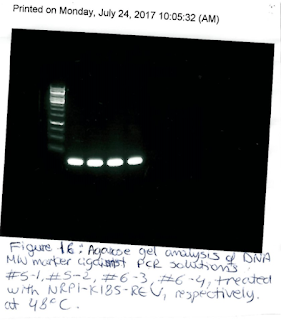